Dr. Brian Anderson was born and raised in Madison, WI.

During 1977-78 he attended UW-Madison and completed his pre-chiropractic work at San Diego City College in 1983.

While Attending Palmer College, in his off hours, he worked as an intern in the Troxell Intern Program.

He graduated with honors from Palmer College of Chiropractic in Davenport, IA in 1986.

After graduation, Dr. Anderson was chosen to work for 3 years as an apprentice to Master Gonstead Chiropractor Dr. J. Larry Troxell as part of the multi-doctor Troxell Chiropractic Clinic based in Davenport, IA.

Since 1989 he has been in active private practice at Anderson Chiropractic on the west side of Oshkosh.

He is a past member of the Tipton Lions and Rotary Clubs and the Oshkosh Rotary and Kiwanis Clubs. 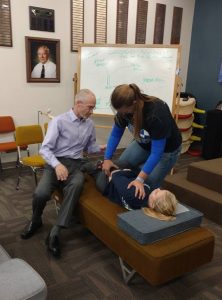 Dr. Anderson is the only Gonstead chiropractor in Oshkosh, WI and the only chiropractor to hold a certification in Wellness Science. His C.C.W.P. credentials were awarded by the International Chiropractic Association in 2008.

He has taught and teaches at post graduate seminars on Gonstead Chiropractic Technique to chiropractic students and doctors at the Troxell Chiropractic Clinic in Davenport, IA and at the Gonstead Clinic of Chiropractic in Mt. Horeb, WI.

In his spare time Dr. Anderson likes to enjoy friends and family, read and study, and watch the Packers.